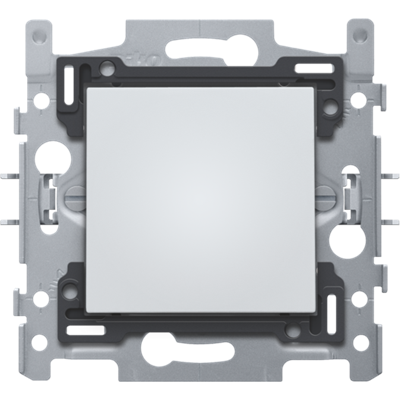 Switch for orientation lighting with white LEDs 830 lux, with claw fixing. The orientation lighting is equipped with an emergency battery which takes over supplying power for 15 minutes in the event of a power failure. A flush surround plate in the colour of your choice must be ordered separately.

Orientation lighting with white LEDs, 830 lux and emergency battery, 6500 K (cold white LEDs), claw fixing. The sockets are equipped with plug-in terminals for clamping the wires. All connection terminals can contain up to 2 x 2.5 mm² of wire. When mounting the socket outlet in a flush-mounting box with grip surfaces, use claws that can be rotated open using screws with a combination screwhead (Pz1 or slot 1 x 5 mm). The claws, which have a depth of engagement of 31 mm, can be manually pushed back into their original position after unscrewing. These claws can also be easily pushed out using a screwdriver. The flush-mounting frame is made from 1 mm-thick metal which is galvanized on all sides after cutting, even on the cut edges. On the horizontal and vertical axes, the flush-mounting frame has 4 grooves for screw mounting in flush-mounting boxes. These grooves have a screw aperture of 7 mm. For mounting on panels, the flush-mounting frame is equipped with 4 screw holes (indicated by a screw symbol) with a diameter of 3 mm. The middle of the flush-mounting frame is indicated (chalk line, laser, ..) in both the horizontal and vertical directions, so that mounting one or more mechanisms can be carried out quickly and easily. At the right and left sides, the flush-mounting frame is equipped with folded-up dovetails, allowing for a quick and perfect horizontal coupling of several switches. The folded-up edges on the outside of the base and their continuation to the inside ensure additional robustness. The bases can be coupled vertically with a centre-to-centre distance of 60 x 71 mm by sliding them into each other. They automatically lock into place. For horizontal coupling of bases with a centre-to-centre distance of 71 mm, the base is equipped with two pre-formed lips at the bottom. By folding these lips down over a length of 1 mm, this rests perfectly on the one below and the centre-to-centre distance of 71 mm is guaranteed. The flush-mounting frame is equipped, both on the top and the bottom, with a dark grey, plastic end border. This border is made of PC+ASA and is joined to the flush-mounting frame using a melting process. The corners of the two end borders are equipped with rectangular openings (7.9 x 1.5 mm) each containing a multi-positional snap hook. Thanks to the snap hooks, the 4 rectangular openings ensure that the flush surround plate can always be attached flat to the wall, even in cases of untidy plasterwork. This works in two directions: If the flush-mounting box sticks out of the plasterwork, the multi-positional snap hooks can compensate for a 1 to 1.2 mm margin; if the flush-mounting box is sunk too deeply in the plasterwork, the snap hooks can compensate for up to a 1.8 mm margin. The end borders also have 4 round openings that ensure the correct positioning of the flush surround plate in relation to the central plate.

Switch for orientation lighting with white LEDs 830 lux, with screw fixing. The orientation lighting is equipped with an emergency battery which takes over supplying power for 15 minutes in the event of a power failure. A flush surround plate in the colour of your choice must be ordered separately. 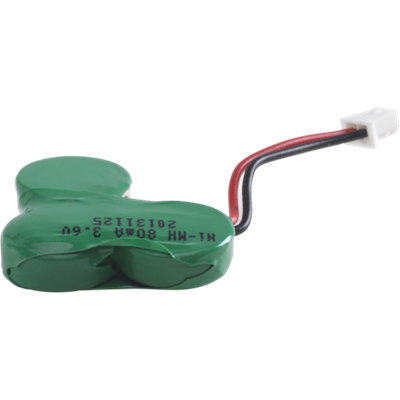 This emergency battery takes over the supply of power for the orientation lighting for 15 minutes in the event of a power failure.