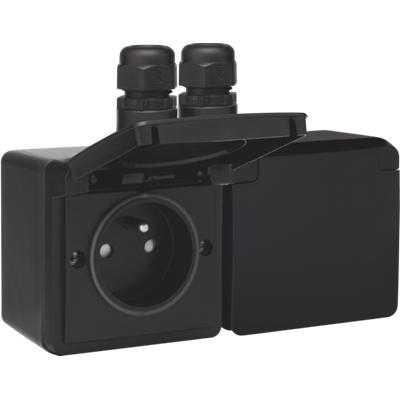 "With this horizontal combination, the two splashproof, surface-mounting wall sockets are equipped with an earth pin, shutters and plug-in terminals. Both wall sockets are also equipped with a hinged protective cover and are pre-wired and mounted in a double, splashproof, surface-mounting box with two inlets on the upper side. The entire unit is splashproof which makes it extremely well-suited for use in damp areas and in demanding environments.

The Niko Hydro products are not suitable for use in ammonia rich environments (e.g. pig houses).

Splashproof, horizontal, double wall socket with earth pin, shutters and plug-in terminals; includes box with two inlets on the upper side black. The sockets are equipped with plug-in terminals with a release for clamping the wires. The releases can be controlled from the front side by hand or with a screwdriver. All connection terminals are located at the top of the end socket and can contain up to 2 x 2.5 mm² of wire. The stripping length (12 mm) of the wires and the wiring diagram are indelibly indicated at the back of the base. The terminals and the switch symbol are indelibly indicated at the front. Two laterally positioned holders inside the outlet hold the mechanism in place. A snap connector holds the wired mechanism in place. There is 15.7 mm of wiring space remaining under the mechanism.