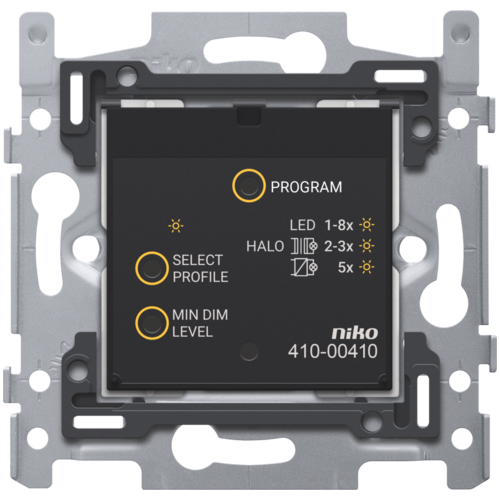 The smart dimmer is suitable for dimming resistive, inductive and capacitive loads as well as dimming dimmable halogen and LED lamps. It has a transmitter and receiver operating according to the Easywave protocol.

If desired, extra controls can be added. These could be both wired push buttons and wireless controls according to the Easywave protocol.

The smart dimmer is connected with a 2-wire system and does not need a neutral conductor. By doing so, it can effortlessly replace an existing single, multiway, or intermediate switching.

It is highly suitable for the expansion of existing electrical installations where drilling or channelling work is not permitted or to avoid complicated cabling.

operate according to the Easywave protocol. It can also be incorporated in a mood setting which can be activated via a wireless control.

The dimmer has a feedback LED of which the operation can be set.