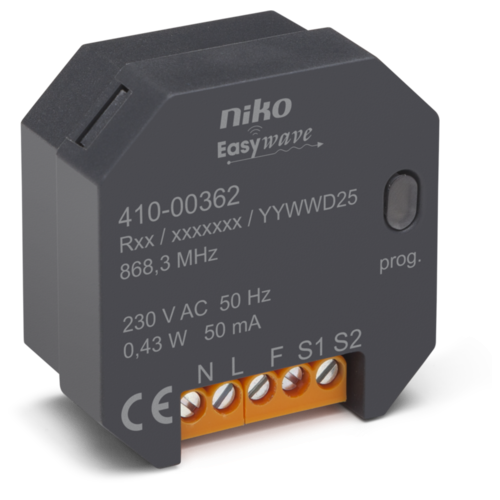 The wireless two-channel transmitter Easywave is suitable for flush mounting and may only be used to operate wireless receivers that work according to the Easywave protocol. This wireless two-channel transmitter allows you to expand the switching functions of existing switches or push buttons via a receiver. The two-channel transmitter checks whether a switch/push button is live and sends the corresponding Easywave code (A, B, C or D) to the wireless receiver, which in turn switches the consumer. The product is part of the Easywave radio frequency system, an installation technique without wiring between the push buttons (control points) and the consumers to be operated. The Easywave system has a modular structure with transmitters and receivers. A wall transmitter is in the form of a push button with two, four or eight action buttons that can be mounted on a wall. A handheld transmitter resembles a classic remote control. One transmitter can control an unlimited number of receivers at the same time, while one receiver can be controlled by up to 32 transmitters. The remote control or wireless control is based on signal transmission via radio waves on the frequency 868.3 MHz. Only products that do not transmit continuously, i.e. 1% per hour or 36 seconds, are allowed on this frequency. This minimizes the chance of malfunction. That is why the wireless Easywave system is ideal for specific applications such as renovation of classified interiors, extensions in existing electrical installations (where cutting or demolition work is excluded), use in offices with movable walls or installations where complicated cabling must be avoided.