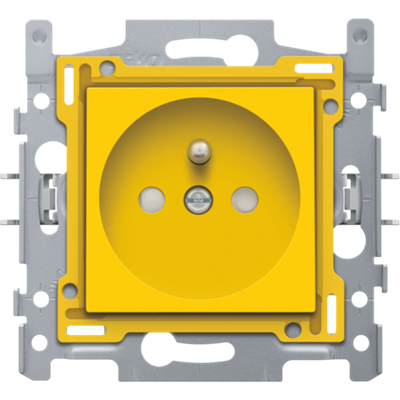 Socket outlet with earth pin and shutters. This socket outlet has a flush-mounting depth of 28.5 mm and is equipped with a plug-in terminals and claw fixing. Includes finishing set. A flush surround plate in the colour of your choice must be ordered separately. Finishing colour: yellow.

Socket outlet with earth pin and shutters, flush-mounting depth 28.5 mm, base and finishing set, plug-in terminals,. The sockets are equipped with plug-in terminals for clamping the wires. The stripping length (14 mm) of the wires is indelibly imprinted on the back of the base. When mounting in a flush-mounting box with grip surfaces, use claws that can be rotated open using screws with a slotted screwhead (slot 0.8 x 5 mm). The claws, which have a depth of engagement of 31 mm, turn back completely when loosened. The 4 rectangular openings (7 x 2.5 mm) in the flush-mounting frame can compensate for a margin of 1 to 1.2 mm if the flush-mounting box protrudes beyond the plasterwork. In the case of such a margin, the flush surround plate can still butt up perfectly against the wall.