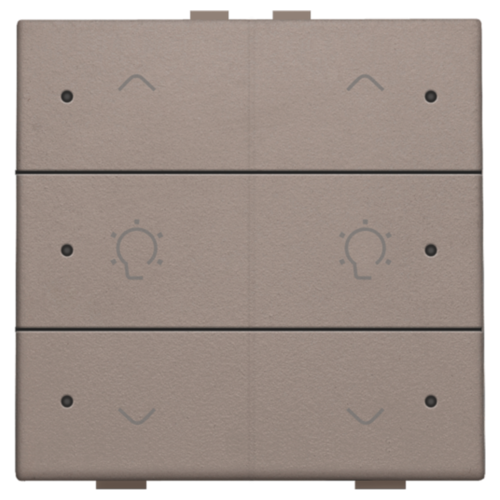 This push button allows you to dim two light points or light circuits. It is attached to the wall-mounted printed circuit board via a click mechanism. An LED indicates whether the light is dimmed up or down. Switch including button. Finishing colour: greige.

The specific action buttons on each push button are arranged in groups of three.

To mount the push button, press the unit onto a Niko Home Control wall-mounted printed circuit board until it clicks into place. The functions of the action buttons can be assigned while programming the installation by linking each function to the unique address of each action button during the addressing phase. This information is then stored in the controller. The upper and lower keys are fitted at the bottom with a small amber-coloured indication LED (1.5 x 1.5 mm) to indicate the status of the action. Using the programming software, you can program the LEDs to light up when the output is either activated or deactivated . Arrows printed on the top and bottom keys show whether you are dimming up or down On the middle key(s) a lamp is printed indicating the favourite button. If you press this key the lighting automatically goes to the set dim level. To dismount simply pull the central plate off the base. 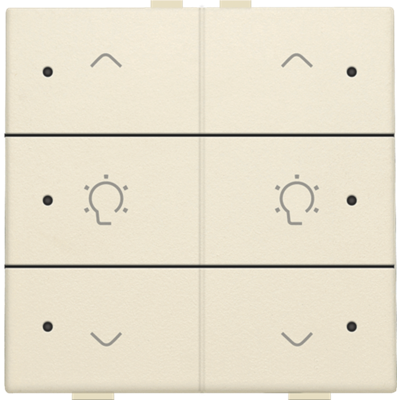 This push button allows you to dim two light points or light circuits. It is attached to the wall-mounted printed circuit board via a click mechanism. An LED indicates whether the light is dimmed up or down. Switch including button. Finishing colour: cream.