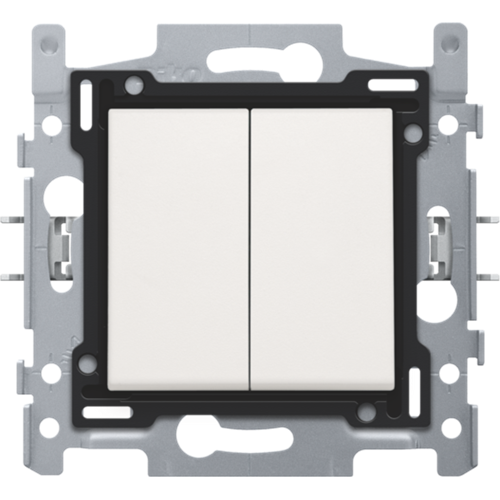 Compound flush-mounted two-circuit switch (base and finishing set). The base is equipped with plug-in terminals and claw fixing. The central plate has two keys to control different light points.

Finishing set for two-circuit switch, two-way switch + N.O. push button, double two-way switch or double N.O. or N.C. push button, white. This central plate is surrounded with a flat edge that is equipped at all 4 corners with a rectangular opening, each containing a multi-positional snap hook. The construction of the central plate ensures that the faceplate can always be attached flat to the wall, even in cases of untidy plasterwork. This works in two directions: If the flush-mounting box sticks out of the plasterwork, the multi-positional snap hooks can compensate for a 1 to 1.2 mm margin; if the flush-mounting box is sunk too deeply in the plasterwork, the snap hooks can compensate for up to a 1.8 mm margin. The flat edge around the central plate also has 4 round openings that ensure the correct positioning of the faceplate in relation to the central plate. After mounting all components (faceplate, finishing set and switch), no metal parts are visible thanks to the flat edge of the central plate.